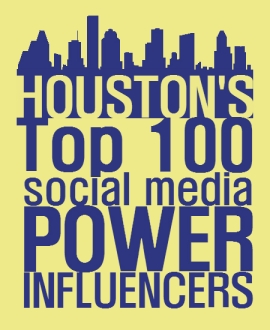 This is the second list of Social Media power influencers in Houston. The first issue from 2013 was well-received… except for the many folks who were left off.

For this year’s issue, we’re getting even a little more strict on qualifications.

Why? I wanted this to be a list of the people that are working in social, day in and day out. Engaging with customers and prospects, writing posts and creating tweets. That’s not to say that what bloggers or writers or SEOs do isn’t important, but it’s not the hardcore social media work that I was looking to focus on.

Besides, where would you stop? Almost anyone at a marketing agency could be included as almost everyone has some sort of social presence, from the CEO down to the interns. Thus, we’ve focused on folks that deal directly with social media.

Firstly, I added everyone from the 2013 list, excluding the folks above who may not be direct social media managers. I added people from LinkedIn near Houston, within 100 miles of 77002, with “Social Media” in their job titles or within their profiles. Handles that were company- or agency- affiliated were removed, unless the person was a sole proprietor.

I read all profiles to determine if the person still lived in Houston and was actively engaged in a social media position, rather than just having social media listed as a skill. I then looked for their Twitter handle listed. If unavailable, I’d search Twitter for it.

If I was able to find a Twitter handle, it had to be a public handle for the analysis to take place. I took a look at the content in the feed to make sure the person was actively tweeting, and the content had to be non-spammy content.

I fed these all into Peek Analytics and got the top 100.

When trying to find out who these influencers are, it’s important to gauge the activity and influence of their followers, both to measure the effectiveness of the content shared by the influencer, as well as to determine how active their followers are (bots and spam accounts are not likely to engage with content or have relationships developed across networks). With this in mind, we used the same methodology that Haydn used for the global list, PeekAnalytics‘ Total Social Pull.

Social Pull is a measure of the user’s audience, expressed as a factor of an average user. A score like Michele Price’s 825 means that she has 825 times the influence of the average user, but it’s not only a measure of network size. It also takes into account other social networks your followers are using, as well as their network sizes. Basically, if you have a lot of people in your network, and the people in your network have a lot of people in their networks, you’re more likely to be influential.

Social Pull as a metric isn’t perfect, as Mark Schaeffer notes in this blog post, but neither is Klout, Kred or PeerIndex. I’m simply using it in a spirit of using the same methods as the global list. You’ll see the social pull ratings as the number listed after each influencer’s Twitter Handle.

You can find your Social Pull here.

Also some changes this year, Damien Franco and Jamie Glover set out on their own – so send them some business! Jennifer Haubein left Forthea for BP, and Ed Schipul moved his whole company, Tendenci to San Francisco!

And yes, I did add myself this year. Multiple folks asked where I ranked, but this year’s list, like last year’s isn’t about me, it’s about cultivating a social community in our great hometown here in Houston.

So without further ado…

3. Madalyn Sklar is an independent Social Media Strategist and founder of GoGirlsMusic.com. @MadalynSklar – 792 (+118)

6. Kara Singh is an actual former coworker and friend from Insperity, where she’s led the way for Social at Insperity Recruiting Services. @KaraSingh – 423 (+91)

7. Chris Makara is also a former coworker and friend from Insperity. Chris is the Interactive Marketing specialist, where he works with the online marketing team to lead Insperity’s multiple business units. He’s also a Social Media blogger and freelancer too. @ChrisMakara – 395 (+134)

8.  Tracey Holloway-Koetting is the owner and Social Media Manager for Get Social Butterfly. @GetSocialButter – 219 (+22)

9.  Grace Rodriguez is Creative Juicer at Culture Pilot where she works on branding and maketing strategy. She is also cofounder of C2 Creative, a creative office space. @GraceRodriguez – 205 (-1)

12. Kami Watson Huyse is founder of Social Media Breakfast Houston and the CEO at Zoetica, a communication consulting agency. @KamiChat – 184 (+5)

13. Raegan Hill is a Marketing Recruiter for Onward Search and one of the most prolific networkers in Houston. She is also spokesperson for The CMO Club Houston. @RaeganHill – 169 (0)

14. Oliver Glaudy is the CMO of Roar Marketing Consultants, a marketing agency. @OlivierGlaudy – 165 (-3)

15. Dwight Silverman is the Techblogger and Social Media Manager at The Houston Chronicle. @DSilverman – 150 (+1)

16. Lauren Fernandez is the Social Media Manager at Landry’s Restaurants where she develops strategy for dozens of concepts with hundreds of locations nationwide. Don’t ask me how she does it. @Cubanalaf – 141 (-12)

17. Sandy Lawrence is the President of Perceptive Marketing, a publishing marketing company. @SandyLawrence – 134 (-1)

20. Mike McGuff is the source for Houston media happenings, founder of mikemcguff.com, freelance media consultant, and I have no idea how I missed him on last year’s list. @mikemcguff – 111

21. Portia Chandler is Marketing Strategist PA & Associates and founder of portiachandler.com where she develops Social Media Strategy and training. @AskPortia – 108 (-1)

24. Trish Cunningham is the Business Development and Expert Manager at Brookwoods Group, a staffing and consulting group. @TrishRC – 93 (+25)

26. Jennifer Valencia is the Director of Client Relations at Unleaded Communications. @JenValencia – 88 (+1)

29. Braxton Huggins is a Co-Founder of the Energy Digital Summit. @whoisbraxton – 80

31. Alexandra Velez is the Founder and Owner of Velez Media, an inbound marketing, SEO and Social Media agency. @VelezMedia – 72 (-1)

33. Marcel Santilli is the Global Social Media Manager for IBM. I have no idea how we haven’t met yet. @Santilli – 70 (0)

35. Sandra Fernandez is the Public Relations Manager for the Houston Public Library. @SandraSays – 63 (0)

36. Scott Cone is the Senior Vice President of Sales and Marketing at The AIM Agency. @scone – 60

37.Mickey Bryan is the Executive Director of Compu-Net, who promotes social media and technology training for non-profits. Mickey is also a Social Network trainer at Leisure Learning Unlimited. @MickeyBryant – 60 (-2)

41. Kathryn Weathersby is a Professional Internet Marketer and Business Coach at KathrynWeathersby.com. @outoftheboxsoc – 50

42. Monica Danna is the Chief Strategy Officer at The Black Sheep Agency, as well as a special events board member of HiMA. @CosmoPolitician – 46 (0)

44. Julian Cavazos is the Marketing and Communications Specialist at YMCA of Houston. @JulianCavazos – 38

46. Zach Doty is the SEO Specialist at Forthea Interactive. @ZLDoty – 37

47. Roxanne Werner is a Social Media Consultant at Shell with Brookwoods Group. @thisisroxanne – 34

49. Joëlle Eid is the Interactive Community Manager at Signet Interactive, a contributing writer for Localeur and founder of @HouTweetDrive, a socially-powered toy drive. @joelletweeted – 31 (+1)

50. Brian Block is the Social Media Strategist and Account Executive at Pierpont Communications, and self-proclaimed Seth Green look-alike (I kinda see it). @BriGuyBlock– 31 (0)