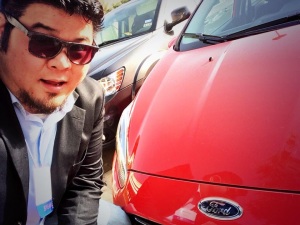 I was amazed a few months ago when the Ford press fleet manager contacted me and asked if I wanted to try out cars – for free. Of course! We’re actually in the market for a new car. Plus, my wife is a native Michigander, and her cousin and an uncle work for Ford, so you could say we’re part of the Ford Family already.

The first car they gave me was a 2014 1.0L Ford Fiesta Ecoboost. I think they choose that one to make sure that they can trust that you’ll return their cars back to them, before they issue you higher-end models. Either way, I hadn’t driven a manual shift vehicle in over a decade, and only when my best friend Charles taught me on his 1996 Ford Ranger in my school parking lot.

And to really put the pressure on, I had the vehicle over the weekend I was driving to Dallas for DFWRocks, a social media conference. Could I trust myself to remember how to drive a stick, and put in eight hours behind the wheel on unfamiliar streets?

Here’s how the week went, through tweets:

Me being a little hesitant about the stick:

After taking the car to work, I couldn’t believe the gas mileage:

After a friend asked about the interior, I offered this shot:

I managed to make it all the way to Dallas…:

Gotta have the Selfie:

And the last day I had the Fiesta, they dropped off a new 2014 Ford Fusion Energi. The two made a nice pair for the Fourth:

So, What’d I Think about the Ford Fiesta?

Basically, I thought the 2014 Ford Fiesta was a great sporty little car that would be a great starter for almost anyone. I only had a chance to seat three in the car, but it seemed that four adult-sized humans could fit comfortably in the car. Even for a relative beginner on a manual shift, the car was easy to get a hang of, and the entire week, I think I only stalled it twice – not bad for a stick-newbie like me if I do say so myself.

The entertainment system offered a lot of features, including bluetooth connection to your phone – a must for the younger crowd that this vehicle is targeted towards. For those that want a little more, voice-activated Microsoft Sync is offered, as well a higher trim and interior packages.